I was in middle school when I started babysitting for the minister and his wife at the little United church in which I was raised. George and Lois were still just a young couple with a baby boy when they enfolded me into their family. George was academic and bookish, Lois was lively and fun. He patiently answered my many questions about our Christian faith on drives to and from their home for babysitting appointments, she often had home-baked treats waiting. He was passionate about liturgy and readily loaned me books from his own library, she was pretty, had her own career, and adored her family and friends.

I quickly loved them—together with their son, and the daughter and the dog who soon followed. It wasn’t hard to do. They felt like a second family to me, taking me to their cottage in the summer, allowing me to witness the realities of clergy family life, which turned out to be not so very different from my own family’s life. Just like my family, they were not perfect. But they were good people.

I’ve long thought that George’s sophistication, encouragement, and teaching together with Lois’ transparent and joyful faith helped to set the foundation for my own faith journey in the years that have followed. The way they built into my life is no doubt part of the reason I have continued to seek out the various ministers and their wives—in the churches I’ve attended—for wisdom and friendship; I suppose I’ve been inclined to associate the people in such roles with George and Lois’ goodness and grace.

I don’t know when I first learned that my friend Karen was a minister’s wife. I don’t remember if it was a fact that she revealed to me soon after our friendship began to blossom, or whether that information was some time in coming. But I am certain that knowing she occupied that role would not in any way have given me pause to reconsider our friendship. If anything, it probably only made me want to know her more.

Karen is warm and real, loyal and honest, funny and fierce—all of the qualities that make for a good friend. And her newest book, The Minister’s Wife: A Memoir of Faith, Doubt, Friendship, Loneliness, Forgiveness, and More contains all of the very best of Karen.

In it, she reveals, “Being a pastor, and being married to one, is a complicated life and vocation. People may put you on a pedestal: They assume you are better, nicer, kinder, and more holy than you are. Or they may skedaddle: They assume you are unkind and judgmental, or just weird.”

In truth, they are none of those things, because of course, ministers and their wives are just people on a journey, trying to do their best in the life to which they feel called. Like we all are.

I’m grateful for Lois and George’s friendship long ago, for Karen and her husband Brent’s more recently, and for all of the ministers and minister’s wives I’ve been privileged to know in between. My life has been richer because of them.

If you don’t know a minister or a minister’s wife, maybe you should think about changing that. If you read Karen’s book, I think you will want to. 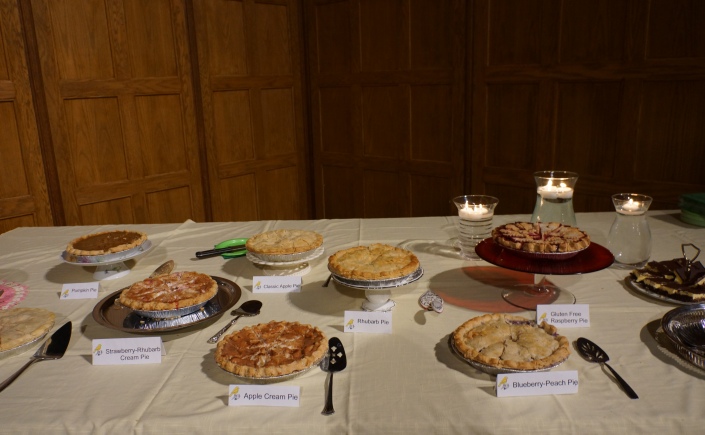 It was our first time ever hosting a book launch. We’ve been to a few such launches over the years of course. You probably can’t be a passionate reader or a writer with writer-friends and not wind up attending one or two. So when it came time to planning our own book launch for Craft, Cost & Call: How to Build a Life as a Christian Writer, we had a few ideas about how we hoped things might go.

The launch happened this past weekend, and looking back, I believe that things went well.

I think what helped them to go well was that we tried to let our plans be guided by our principles.

As people who believe that we are called to love others as ourselves, I can see in hindsight that it was the principle of loving others that drove our decisions. Not consciously. But as I reflect on the weeks leading up to the event and the event itself, I think it was the desire to try to treat others as we would want to be treated that shaped and undergirded most of our choices.

What kind of atmosphere would we, ourselves, most like to experience at such an event? (Relaxed fun with candlelight.) How long would we want to have to sit? (Not long at all.) What sorts of things would we most enjoy hearing? (Definitely not the authors droning on and on.) Should we serve food and beverages? (Yes, of course.) Should we do a hard sell? (Definitely not.) Should we sign books? (In advance, so as not to keep people waiting. Although, truth be told, we also wanted to avoid the awkwardness of sitting at a table if no one actually wanted to buy books.)

Again and again, we came back to the realization that even though our book launch would be a celebration of something that we had done—we did not want it to be “all about us.”

So we invited other writers to tell us a bit about their writing lives, to read portions of our book, and then to respond to it. A fire blazed in the fireplace, candlelight flickered throughout the room, dinner jazz played on the sound system, and our guests visited with us and with one another and feasted on a delicious pie buffet.

As for Karen and I, once the first guests began to arrive, we relaxed and delighted in the visible reminder that we are blessed to have people in our lives who care enough to show their support and come to a party celebrating this thing that we have done. And yes, we sold some books. We also enjoyed our guests. We ate pie. Our cups overflowed. Our hearts are full.

I had forgotten the sheer joy that could come with crafting words into meaningful sentences, the exuberant rush as paragraphs and pages poured out from some inner well deep within. But this new book, Craft, Cost & Call represents the most writing fun I’ve had in recent memory.

Like dancing to a favourite song when no one is watching, part of that experience came from the fact that there was no client on this project. The only people my co-author and I were striving to please were our book’s eventual readers.

The other part of writing with abandon no doubt came from the fact that my co-author happens to be a dearly loved friend. Karen Stiller is a woman I admire greatly. Anything done with a friend can be more fun than doing it alone, especially when you laugh together as much as Karen and I do. We believe that ours is a friendship that was heaven sent; it began more than a decade ago when my name literally popped into her mind one morning while she was applying mascara. She subsequently reached out to me with a partnership opportunity, and the rest, as they say, is history.

Now, our history will forever include this little soon-to-be-published book, Craft, Cost & Call : How to Build a Life as a Christian Writer.

It was years in the making, not only because we worked on it together for that long, but also because it represents the sum total of decades worth of all we’ve each learned so far about what it means to earn a living as writers who are also people of faith.

I’m proud of this little book. I’m thoroughly delighted with the outcome. It gives me deep pleasure to think of passing along some of the hard-won lessons learned through decades working as a freelance writer. And I’m thankful for the way that working on this project together with Karen not only took my writing to new places—reminding me of the joy to be had in practicing this craft I believe I’ve been called to—but because it took my friendship with Karen to new places too.

When we thought we were getting close to the end of our writing, we sent the manuscript out to some other writers we admire and asked for their feedback. We were encouraged and overwhelmed by their enthusiastic response. Read their kind words of endorsement here.

Then we invited my daughter Jenna, an illustrator, into the project. Her drawings add a touch of whimsy to the book’s pages. Our hope is that readers will experience as much delight during the time they spend immersed in this book, as we did in writing it.