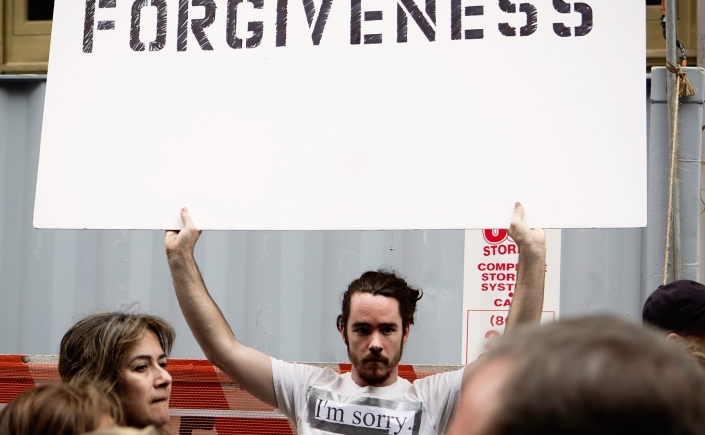 The Christian practice of forgiveness is another one of those topics I approached with just a teensy bit of dread. I’m old enough to have learned a few things about myself in the course of a lifetime of forgiving, not wanting to forgive, asking for forgiveness, not being forgiven, and being forgiven when I felt unworthy of it.

I’ve learned, for example, that not wanting to forgive someone—thinking that they’ve hurt me so deeply or intentionally that they don’t deserve my forgiveness—can lead to an ugly sense of self-righteousness that blinds me to my own faults and failings. Unforgiveness quickly roots and grows into a huge plank in my eye. I’ve also learned that there’s a thin line between lack of forgiveness and self-deception; that I’m capable of being pleasant towards someone who’s hurt me—in an “aren’t I doing well to forgive them?” kind of way—then consoling my still-present hurt by talking about it to others. Like eating a bowl full of Hallowe’en candy, one peanut butter cup after another, such gossip feels good in the moment, but leaves me feeling sick afterwards.

These are not pretty things to acknowledge, let alone to put into writing.

But on the up-side, I’ve also learned a few things about the actual practice of forgiveness. Here are five of them:

Those are five things I’ve learned. But when I read L. Gregory Jones’ essay, “Forgiveness” in the tenth chapter of Practicing Our Faith, I was reminded of a few more.

The first thing Jones reminded me of is that the things I’ve had to forgive over the course of my life are small potatoes. “Thinking about forgiveness—to say nothing of finding the courage to practice it—can be difficult,” he writes. “Merely to consider this practice causes us to think about horrifying evil: slavery in the United States, or the Holocaust in Nazi Germany, or individual acts of rape, child abuse, and domestic violence.” Or, we might add, acts of terrorism against defenceless victims. “It is difficult to comprehend the depths of pain and suffering in such situations,” Jones says.

There was a time in my life when I thought that even considering the possibility of true forgiveness in such cases was inconceivable.

I don’t any more.

I’ve read about Truth and Reconciliation in Rwanda and about the Charter of Forgiveness issued by Canada’s Indigenous peoples. I’ve visited an Amish community in Pennsylvania where a deranged shooter took an entire school hostage, killing children and himself, only to have the parents of the victims express forgiveness within hours of the tragedy. I’ve read about Corrie Ten Boom and interviewed people like Kim Phuc. I’ve seen that forgiveness leads to healing, restoration, and hope, like sunshine in March leads to the buds on my magnolia bursting into beautiful blooms in May.

But I honestly can’t fathom what it means to forgive in such circumstances. I feel a little afraid to even think about it, to be honest. Afraid that I might one day find myself in a big potatoes kind of situation. And that makes me realize I’ve still got some learning to do, that learning the practice of forgiveness—that practicing the practice of forgiveness—as Jones points out, is a lifelong process.

The alternative, in Jones’ penetrating words is leading a life of “chilling apathy … loveless indifference … where people rest content with low-grade bitterness rather than struggling to transcend it.”

However his essay also offers help for discerning a way forward. He writes, “If we are to grow in the practice of forgiving one another, we need also to come to a better understanding of the shape of Christian forgiveness, of God’s practice in forgiving us.”

I’ve learned that forgiveness is shaped like a cross.

Some time ago, I was struggling with a deep sense of betrayal as a result of the actions of someone else. As I was journaling and praying about what to do with my feelings, I got a mental image of Jesus on the cross, praying, “Father, forgive them, for they know not what they do.”

Suddenly, I knew in a way that I’d never known before that his prayer concerned me, because it was for my sins, too, that he died. “They know not what they do”  applied to me. How often had I gone about my day-to-day life not thinking about the full impact of my words or actions on others, and so sinned against them and against God? How many people had I betrayed, without realizing the impact of my betrayal? “You don’t become a Christian and stop being a jerk overnight,” as one writer friend puts it, and we’re often incapable of knowing what we don’t know. It’s harder to see the jerkiness in ourselves than it is to see it in others. But that day, I saw it in myself anew, and recognized that I had been forgiven, which caused me to realize that I, in turn, could pray, “Father, forgive them, for they know not what they do,”  on behalf of others.

That’s surely why Jesus taught us to pray, “Forgive us our sins as we forgive those who sin against us.” It’s intended to be a daily confession and request for forgiveness because Jesus knew we’d need to offer up such prayers every day.

So it was that on that particular day, in that moment, the plank fell out of my eye and I confessed the way I’d been nursing my hurt by ruminating on it. And for the first time in a long time, I felt truly free.

Practicing My Faith, Part 11 – This post is eleventh in a series and part of a culminating project for a course I am taking on Spiritual Discernment and Theological Reflection at McMaster Divinity College with Dr. Wendy Porter. For context, read part 1 and part 2.