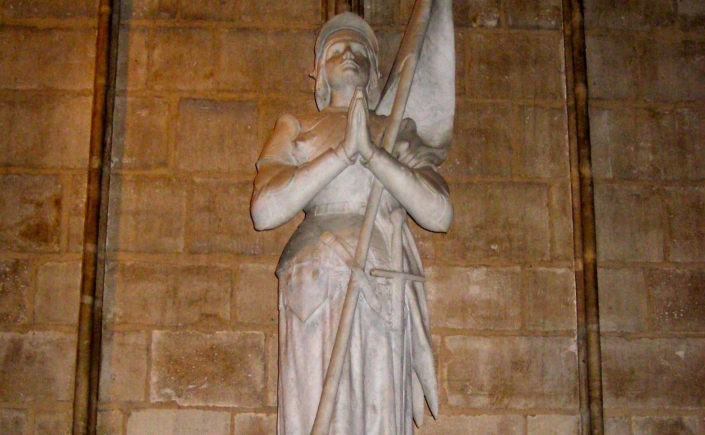 Who were your childhood heroes? In honour of tomorrow being the eve of All Saints Day—a Christian celebration remembering those who’ve gone before us in the faith—I thought I’d share a little about one of my own childhood heroes. Although my faith tradition doesn’t celebrate All Saints Day—or venerate saints with a capital “S”, Joan of Arc is definitely one of those.

She was a 15th century, illiterate, French peasant girl.

At the age of about 17, she followed what she believed was God’s leading, and took command of an army. She liberated her country from English occupiers and changed the course of her nation’s history. At 19, she was unjustly condemned following an ecclesiastical trial during which she confounded the greatest theological minds of her day. She was burned at the stake on trumped up charges of heresy; 25 years later, the results of her trial were annulled. In 1920 the Roman Catholic Church declared her a Saint.

The book I read about Joan was one my mother passed on to me. She had read it as a girl and loved it. I loved it too. I remember the musty smell of its yellowed pages and the feel of its hard, red cover, fraying at the edges. I remember pouring over the colourful illustrations depicting “Joan the Maid” in a gleaming suit of armor atop a strutting steed. I remember feeling inspired by her courage and daring in taking on a vocation that was without precedent for a woman. I remember being moved by her ardent love and intense prayer life. I remember thinking that if God could speak to Joan then He could speak to me too. I remember crying at the injustice of her execution.

When I came to the end of the book, I mourned her for days.

But I never forgot her. Looking back, I realize she helped to shape my life by shaping my belief—early in life—that a relationship with God was not only possible, but worth pursuing.

So it was an interesting exercise to revisit the life of Joan of Arc recently, more than 40 years after we’d first met, as part of the requirements for a course I took in Christian History and Theology. This time I read biographies, scholarly research, an epic poem and—what was most compelling of all—Joan’s own words translated from letters and trial manuscripts. As I read, she came alive to me once again. I couldn’t get enough of her.

I’ve come to believe her story has lessons for us today.

Lessons about leadership, strength in the midst of suffering, human nature, and injustice.

When she took charge of her army, she gave new hope and courage to her countrymen in the midst of deep despair, reminding me that hope is essential—not only for military battles—but for all of life. It was her vision, devotion to her mission, courage, integrity, honesty, and selflessness that made her an accomplished and trusted leader.

Today, we tend to label as “crazy” those who profess to hear voices from heaven like Joan did. I don’t know what to make of her voices. But I am struck by the thought that her devotional life brought her to a place of knowing her God intimately.

Reading the translated transcripts of her trial, I was amazed at her wisdom—and at the efforts of her judges to trip her up. They were men who represented the greatest theological minds of that time, yet they were vindictive and self-righteous, reminding me that the powerful have always made life difficult for those who threaten them. Their example can serve as a warning for those who hold positions of authority and influence—that great wrongs can be perpetrated in the desire to do what is right. Joan’s interrogators were also learned men; as such, they offer up a cautionary note to those of us who pursue academic study or intellectual development at the expense of spiritual maturity—that great learning can lead to arrogance and spiritual blindness.

But above all, Joan’s example bears witness to me today, no less than it did more than four decades ago, that remarkable things can happen when we seek God’s direction, step out boldly in faith as He leads us, and trust Him to accomplish all that He promises.

2 thoughts on “A reflection on a favourite saint, for All Saints Day”